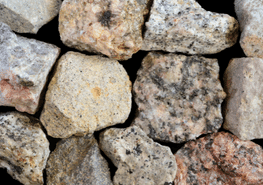 What is anorthosite and what is so special about it?

Alumina production from alternative, available in Europe, sources & secondary materials, is the Holy Grail of European Metallurgy: The AlSiCal technology is the culmination of decades of international research on alumina production from alternative sources/secondary raw materials, combined with more modern knowledge (and concerns) regarding CO2 emissions and environmental impact. In this article we explain what anorthosite is, what is so special about it, and where it can be found.

Feldspars, together with quartz, are the most common rock forming minerals. The family of feldspars has three “extreme” members:

The mixture of albite with anorthite is creating the family of plagioclase feldspars. 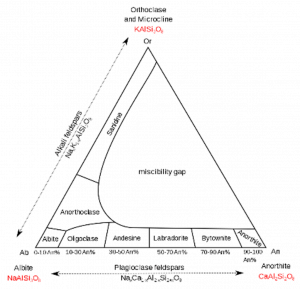 Anorthosites are igneous rocks consisting of 90% or more plagioclase feldspar. The term anorthosite was introduced by T.S. Hunt (1863). Anorthosites, therefore, are rocks dominated by plagioclase (and preferably for AlSiCal project by anorthite).

According to Ashwal (1993) anorthosites have been categorized into six basic types, with distinct features and associations. Nevertheless, on some occasions they have transitional characteristics and a few of them do not easily fit into this classification scheme.

Where can it be found

It is known that anorthosites dominate some planetary crusts such as that of the moon (and possibly Mercury). But it would be difficult to get there to mine them… On Earth they are abundant in a few places like the Grenville Province of the eastern Canadian Shield (Ashwall 2010), in Norway (Scanofennic Shield), in Greenland, in South Africa and in general in the centre of big tectonic plates, where rocks are really old.

As a rock type, it can be stated that anorthosites have formed over the entire range of geological time and presumably are still forming today. Anorthosite occurrences are quite diverse and when their distinctive features are used to categorize them, it becomes obvious that some types show very clear temporal restrictions. Well known are the anorthosites of the proterozoic massifs and the archean calcic anorthosites, both of which are restricted in space and time. Anorthosites found in layered mafic intrusions such as Bushveld or Stillwater, do not show such restrictions. Anorthosites can also be found within ophiolite complexes, on the ocean floor, in subvolcanic ring complexes and as inclusions in a wide variety of rock types. They, additionally, occur as meteorites.

Anorthositic rocks, containing more than 90% of the mineral plagioclase, are common in several geological provinces worldwide and usually occur in gargantuan sizes, e.g., Bushveld Complex anorthosite in South Africa occupies an area of 50,000 km2 and known deposits in eastern Canada more than 155,000 km2. The two largest anorthosite complexes in Western Europe are situated in Western Norway: the Inner Sogn-Voss province (~ 1700 Ma old), and the Rogaland province (~ 930 Ma old). Additional deposits have been found in other parts of the continent – e.g., in Greenland and in eastern Europe (e.g., Latvia, Ukraine, Poland and Russia).

Anorthosite is the best alternative resource because it’s abundant in Europe and worldwide and has a unique chemical composition which allows the production of three products from the same process with no wastes.

As mentioned, anorthite’s chemical formula is CaO·Al2O3·2SiO2 i.e., it contains one alumina (aluminium oxide), two silicas (silicon oxide) and one calcia (calcium oxide). All three oxides are highly demanded for several applications. These raw materials are currently obtained through traditional processes that consume a lot of energy and generate large CO2 emissions, and in the case of alumina, lots of bauxite residue from bauxite. Indeed, bauxite faces multiple challenges e.g., limited resources in Europe with degrading ore quality (it is a critical raw material for European industry) and serious environmental problems due to the generation of bauxite residue, when processed by Bayer process. Several research studies have been undertaken by both scientific community and industrial sector in Europe, Canada, US and other countries, to test the possibility for the production of alumina and aluminum from alternative resources as anorthosites and clay minerals, through different process routes.

Anorthosite is one of the best alternative source materials for alumina production because it is abundant, widely present in Europe (and worldwide) and has a unique chemical composition that allows the production of not only 1, but up to 3 high-demand raw materials from the same process, with no hazardous residue and virtually Zero-Waste-Mining

Anorthosite can yield up to ca. 90-93 wt% of valuable products (30 wt% alumina, 48 wt% silica and 15 wt% CaO), based on a generic (favorable) composition. These three products are sought to be produced from anorthosite in AlSiCal project. Additionally, quantities, qualities, accessibility and suitability of anorthosite deposits for the technology will be assessed in AlSiCal by a team of experts from three continents (Europe, Latin America and Africa).

As said, Alumina production from alternative, available in Europe, sources & secondary materials, is the Holy Grail of European Metallurgy: The AlSiCal technology is the culmination of decades of international research on alumina production from alternative sources/secondary raw materials, combined with more modern knowledge (and concerns) regarding CO2 emissions and environmental impact. The AlSiCal project will benefit from the knowledge gained in previous studies made by IFE on anorthosite use for alumina production, with direct access to the reports and information accumulated during previous projects (e.g. the Anortal project, among others) performed during the period 1976-1987. From this knowledge, the project will seek to successfully produce alumina, silica & precipitated calcium carbonate (PCC) from anorthosite while harnessing CO2 capturing, rendering the whole process a zero-waste one.

The mapping, assessment, and qualification of anorthosite and other alternative sources is carried out by AlSiCal’s international team, considering worldwide options.

Anorthosite deposit information produced by the AlSiCal project, such as the mapping of anorthosites (Available Deposits of Anorthosite, Anorthosite Type, Latitude – Longitude and Outcrop Area (km2)) are uploaded and shared in the RMIS database.

Based on the information given in this database, mapping of anorthosites has been carried out on GIS software producing several layers so far, namely:

Examples of this virtual mapping can be found in RMIS database, as well as information on geology, maps and images from anorthosite deposits worldwide.

To find more information you can visit RMIS website. 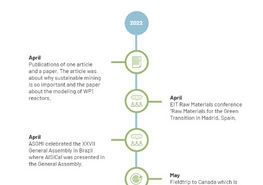 What has happened the last months in 2022?

What is anorthosite and what is so special about it?